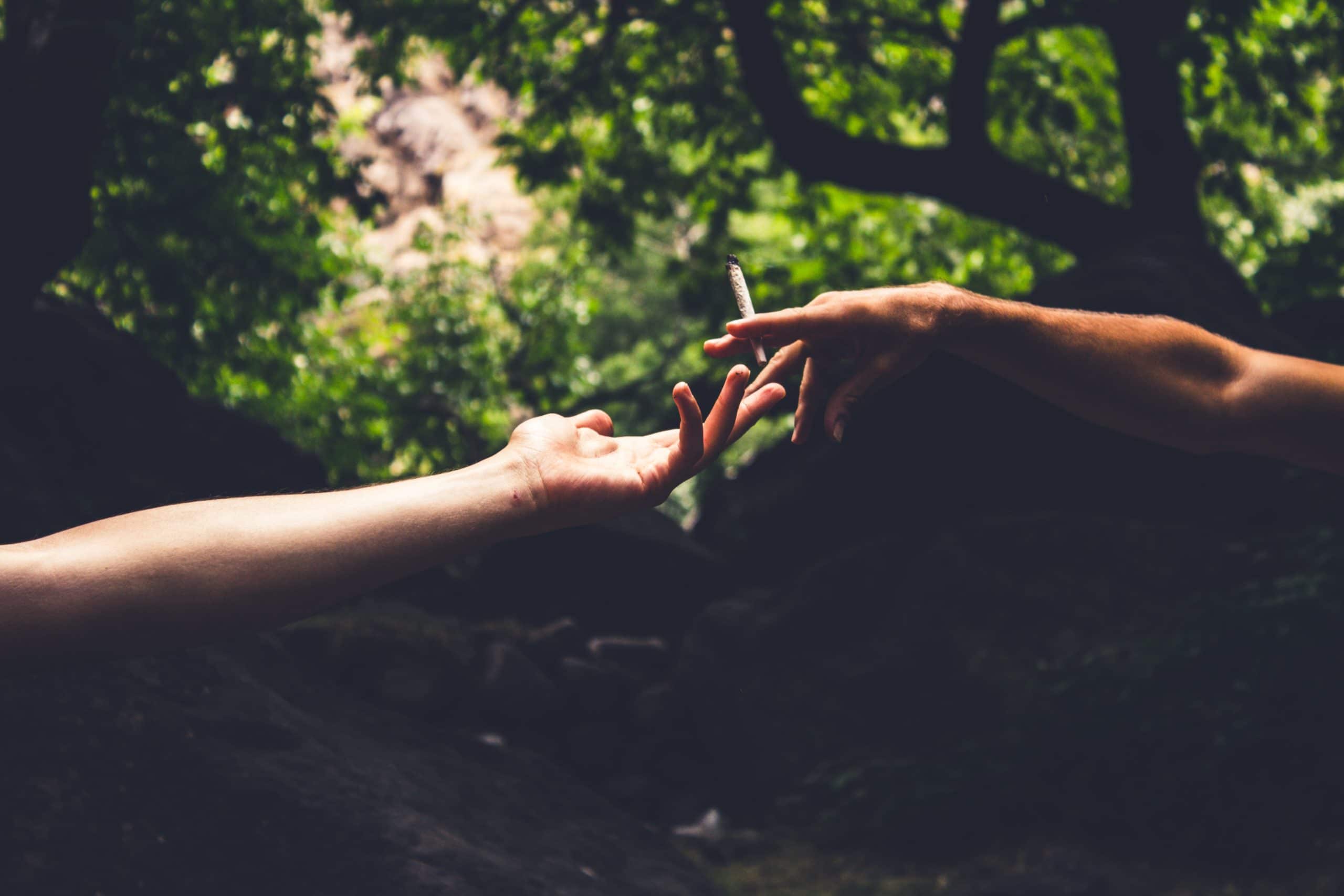 420: April 20th (4/20), considered as an occasion for smoking or celebrating the smoking of marijuana. Fun Fact: The Origin of “420” was coined as a code word by high school students in San Rafael, California in 1971 with reference to 4:20 p.m., the time at which they regularly met and smoked marijuana every day. The ritual spread, and soon 420 became code for smoking marijuana. Eventually 420 was converted into 4/20 for calendar purposes, and the day of celebration was born!

Adult Use: The regulation of marijuana that was not medically prescribed. Individuals over 21 years of age can legally purchase/ consume cannabis in the state of Massachusetts recreationally.

BHO (Butane Hash Oil): BHO is a very potent marijuana concentrate made by dissolving the plant in a solvent, usually in a dangerous process using butane. BHO is very high in THC and creates thick oil also known as honey oil. Using BHO, also known as wax or shatter, is also referred to dabs or dabbing.

Blunt: A blunt is a cigar that has been hollowed out and filled with cannabis. It is rolled with the tobacco-leaf “wrap”, usually from an inexpensive cigar, or any other wrap that isn’t a joint paper that has glue. A blunt is different from a joint, which uses rolling papers and they burn much slower.

Bong: A bong is a marijuana water pipe, available in many sizes and shapes, usually made of glass.

Bowl: The part of a pipe that is used to hold the cannabis. If attached to a water pipe, or bong, it is sometimes referred to as a slide.

Bubbler: A glass pipe with an additional chamber that holds a small amount of water – and it is referred to as a water pipe. The smoke is filtered through the water chamber to offer a much smoother hit than other dry pipes.

Bud/Nug: Bud is the actual flower of the cannabis plant and is a general slang term for marijuana. The bud is cut, dried, and cured prior to use, as well as tested for their THC and terpene content.

Budtender: A person who serves customers at an establishment where marijuana is sold. *A.K.A. Flowertender at Flower & Soul.

Cannabinoid: Chemical compounds found in cannabis that can affect your mind and body when consumed. Any of a group of closely related compounds which include cannabinol and the active constituents of cannabis are considered cannabinoids. Commonly known cannabinoids: THC, THCV, CBD, CBN, CBG and CBC.

CBD (Cannabidiol): CBD is an abbreviation for cannabidiol, one of the main elements of cannabinoids. It has very low potency and is considered effective for medical use without the psychoactive or “high” effects.

Chillum: Also known as “one-hitter” or a “bat”; is a small, discreet pipe that only holds enough weed for a single hit. They are very convenient to transport, conceal, and easy to use. Most commonly made out of glass.

Consumption: Cannabis consumption refers to the variety of ways cannabis is consumed, among which inhalation (smoking and vaporizing) and ingestion are most common. All consumption methods involve heating the plant’s THCA to decarboxylate it into THC, either at the time of consumption or during preparation. Other consumption methods include – drinking, topicals, tinctures, and edibles.

Concentrates: Cannabis concentrates are very strong substances made from dissolving marijuana plant material in a solvent. It has very high THC and produces products like thick oils (BHO), budder, wax, or shatter.

Dabs/Dabbing: Slang words for using cannabis concentrates. Dabs occur in various forms: shatter, wax, budder, live resin, oil, etc., and they each have different uses and can be consumed in many ways.

Edibles/Medibles: Edible and medible cannabis refers to gummies, cookies, brownies, cakes, drinks, etc., that are prepared with marijuana for eating or drinking. They are a very popular alternative to smoking marijuana.

Eighth (⅛): A measurement of cannabis weight. It is the shorthand for “one-eighth of an ounce,” or 3.5 grams. Cannabis shops and dispensaries sell cannabis in a variety of different weights, the most common of which are grams, eighths, quarters, half-ounces, and ounces.

Extract: This is THC that has been extracted, or removed, from the cannabis flower to isolate the compounds that naturally occur in the plant. The extract is often used to make edibles, vape cartridges, and concentrates.

Flower: Refers to the smokeable, trichome-enriched part of a cannabis plant. Flower is the most popular form of cannabis consumption due to it’s versatility and methods of use; it can be smoked using a pipe, bowl, or bong. It can also be rolled into a joint or blunt and even used for cooking.

Green Out: Used to describe the feeling of nausea and/or anxiety that occurs from indulging in too much THC. Not eating prior to smoking or eating too many edibles can do this, but it most commonly happens to first time users.

Grinder: A device used for grinding weed that breaks cannabis flowers into smaller pieces for joints, blunts, and bowls.

Hash: Short for hashish, a cannabis resin from the top of the plant, used for recreational and medical consumption. It is usually very strong and can be smoked, chewed or swallowed.

Hash Oil: Hash oil, or honey oil, is a concentrated form of cannabis, usually produced with a chemical solvent. Butane Hash Oil, or BHO, is dangerous to make and highly potent.

Hemp: Hemp is a variety of marijuana grown for its fiber. It is non-psychoactive and not used for getting high.

Hempfest: An annual event that occurs in many cities across the United States for participants to express their cannabis pride.

Indica: Indica strains come from the cannabis indica plant, which is generally shorter and bushier than their sativa counterpart. Traditionally, indica strains are associated with more of a body high that makes you feel relaxed. It can also be referred to as “in-da-couch” because it can cause some consumers to experience couchlock from the relaxation effects.

Joint: A joint is a rolled marijuana cigarette, also known as a spliff, reefer, jay, etc. A single inhale of cannabis is called a hit.

Keif: The concentration of the ‘crystals’ or T.H.C. glands from the Cannabis plant into a dry powder (usually golden or blonde in color); it often collects in the bottom of a grinder and is a viewed as a delicacy by cannabis smokers.

Marijuana: Also known as cannabis and is referred to by many slang terms from the past and present. A few nicknames for marijuana and cannabis are: pot, ganja, bud, weed, Mary Jane, etc. Marijuana can be smoked, eaten, vaporized, dabbed or applied to the skin.

Paraphernalia: Drug “paraphernalia” refers to any accessories made for using or concealing drugs, typically for recreational purposes. Examples are bongs, pipes, scales and oil rigs.

Pipe: A marijuana pipe is similar to and used much like a tobacco pipe, although glass pipes are the most popular.

Potency: Refers to the strength of marijuana and is usually measured by the amount of THC; the average THC potency is anywhere between 15-25% but can be higher or lower than that.

Purity: Describes the ratio of THC in a product and also refers to the absence of additives and chemicals in cannabis.

Rig: A rig or oil rig is a large pipe with a heated nail used to vaporize and inhale cannabis concentrates. The use of a rig also requires heat from a torch.

Roach: A roach is the remains of a joint, blunt or roll up cigarette after most of it has been smoked. Most roaches are disposed of immediately after smoking a joint; however, some users will retain the roach for use at a later date.

Rolling Papers: Also known as blanks, joint paper, or cigarette papers, rolling papers are sheets of very thin paper used to encase cannabis when rolling a joint. The sheets may be made of hemp, rice straw, wood pulp, or flax, and can be used to either hand-roll or machine-roll cannabis.

Sativa: Typically refers to marijuana that will give a more uplifting, stimulating buzz while indica is traditionally associated with a mellow feel. This lineage is best for doing activities during the day or creative works.

Session (Smoke Sesh): Slang term used to describe the action of smoking cannabis with others.

Shatter: A transparent form of cannabis concentrate that, when cold, resembles amber-colored glass. It has a very high THC and is commonly used in dabbing – called shatter because it breaks in a similar way that glass breaks, it shatters.

Skunk: Refers to an odor of cannabis that is similar to the smell of a skunk.

Spliff: Nearly identical to a joint except loose tobacco is mixed in with the marijuana herb before rolling.

Strain: In popular cannabis culture, a strain is a specific variety of cannabis that has been bred for particular characteristics like aroma, potency, appearance, and effects. These strains are given names, often based on those characteristics.

Terpenes: Naturally occurring compounds in cannabis flower that give the bud its smell. Terpenes are also responsible for giving the flower its color and taste and can influence the effect felt by the consumer. Together with the cannabinoids, terpenes illustrate synergic and/or entourage effect. *See Terpene Guide below for more information on specific terpenes

THC: An abbreviation for tetrahydrocannabinol, the main psychoactive ingredient in cannabis that is responsible for the “high” effects.

Tincture: A liquid cannabis extract that is usually dosed with a dropper. They are often flavored and can be placed on the tongue or mixed in a drink. Tinctures are usually very low in potency and used medicinally.

Topical: A kind of cannabis product such as a lotion or cream that is applied to and absorbed through the skin.

Vape Pen: A pen-shaped portable vaporizer that can be used with cannabis oil, wax, shatter or leaves. Also known as e-cigs, they are quick to use and often disposable. The inhaled vapor has little odor so vape pens’ use can be hidden.

Vaporizer/Vaping: Vaporizing or vaping uses electricity to heat and evaporate cannabis without the combustion of flames. It requires a battery-operated handheld or plug-in device, like an e-cig, vape pen, or vaporizer, which is used for dabbing marijuana concentrates

Wake & Bake: The action of consuming cannabis early in the day, typically the morning or soon after the individual wakes up. (At Flower & Soul, Wake & Bake is known as a morning pre-roll special!)

Wax: A form of marijuana concentrate. (see BHO, above)

Weed: A slang term of marijuana and cannabis.